Skip to content
No children on husbands in the room for this one.
I would like to thank CE for sharing this story with me. This story didnt happen to CE but still a great story for a holiday weekend.
I had a flat tire on I-90 yesterday so I pulled over, got out of the car
and opened my trunk. I took out my cardboard men, unfolded them and stood them at the
rear of my car facing oncoming traffic.
They look so lifelike you wouldn’t believe it!
Just as I had hoped, cars started slowing down looking at the men which
made it much safer for me to work on the side of the road.
People honked and waved, and it wasn’t long before a police car pulled up
behind me.
He wanted to know what the heck I was doing so I calmly explained that I was changing
my flat. He told me he could see that, but demanded to know what the heck my cardboard
men were doing standing at the rear of my car.
I couldn’t believe he didn’t know! So I told him …
Well, I explained to the angry Policeman 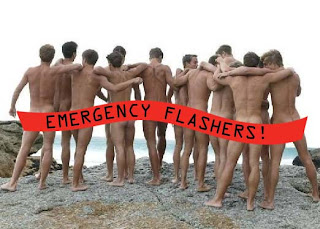 Hope you all got a good laugh like I did.
Who is going to see the movie Magic Mike?