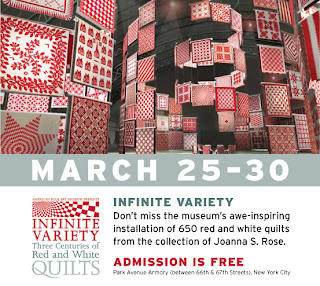 When you come across an article such as this from Pilar Valadas of the New York Times you can’t help but get all goose bumpy:

excerpt from her article-
For six days only — March 25-30 — what promises to be an extraordinary exhibition will fill the Wade Thompson Drill Hall at the Park Avenue Armory. “Infinite Variety: Three Centuries of Red and White Quilts,” which was organized by the American Folk Art Museum, will present 650 red and white quilts — no two of which are alike — from the collection of Joanna S. Rose (who will donate 50 of them to the museum when the exhibition ends). The largest quilt exhibition ever mounted under one roof in New York City, it will fill the 55,000- square-foot drill hall to a height of 45 feet with a series of “rooms” defined by quilts that will be suspended on cardboard tubes. Read the entire article here.

This is a picture of the Park Avenue Armory before it will be transformed into the artist rendering as shown above. 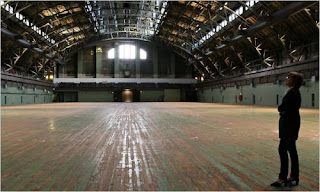 New York quilt collector Joanna Rose received her first quilt, a red and white blanket with a schoolhouse design, upon the birth of her first child in 1957. She hasn’t stopped collecting since and has amassed more than 1,300 quilts. When Ms. Rose, who belongs to a prominent New York real-estate family, recently turned 80, she decided to put her entire collection of red and white quilts—some 651—on public display.
or visit the American Folk Art Museum

Can you imagine 650 red and white quilts and no two are alike? Three centuries of red and white quilts from one single collection owned by Joanna S. Rose.  Quilts in the New York Times and the Wall Street Journal, they must have learned what we knew all along that cotton is a commodity and highly sought after whether as a crop or a cover.
I am taking a belated spring break and headed to the show of a lifetime and must say I am very excited. The only thing that can make this event any greater is that New York will be hosting the Final Four as the semi-final and championship games will be played at Madison Garden on March 29th and March 31st. (same days I am in town for the quilt show) 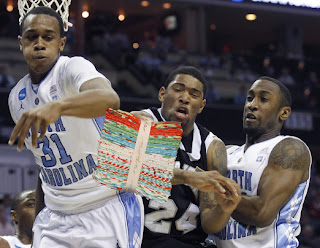 What a great visual….  Can you imagine the “ballers” and the “quilters?” Wouldn’t that be funny to see balllers aggressively grabbing after a me and my sister Christmas fat quarter bundle? I wonder how these guys would fare at Quilt Market’s sample spree because I have seen some quilter’s going after IT just like this. I will be at the show on the 30th. Hope to see you there.